Mid-century modern living room design is having a moment—and rightfully so. This timeless style transcends trends and can easily be incorporated into any home, regardless of location or era. Characterized by clean lines, organic shapes, and a focus on function, mid-century modern design has its roots in the 1940s and ’50s. The period changed how we think of design, emphasizing functionality and simplicity over excessive embellishment. Read on to dive deeper into this timeless style and everything that made it what it is today. 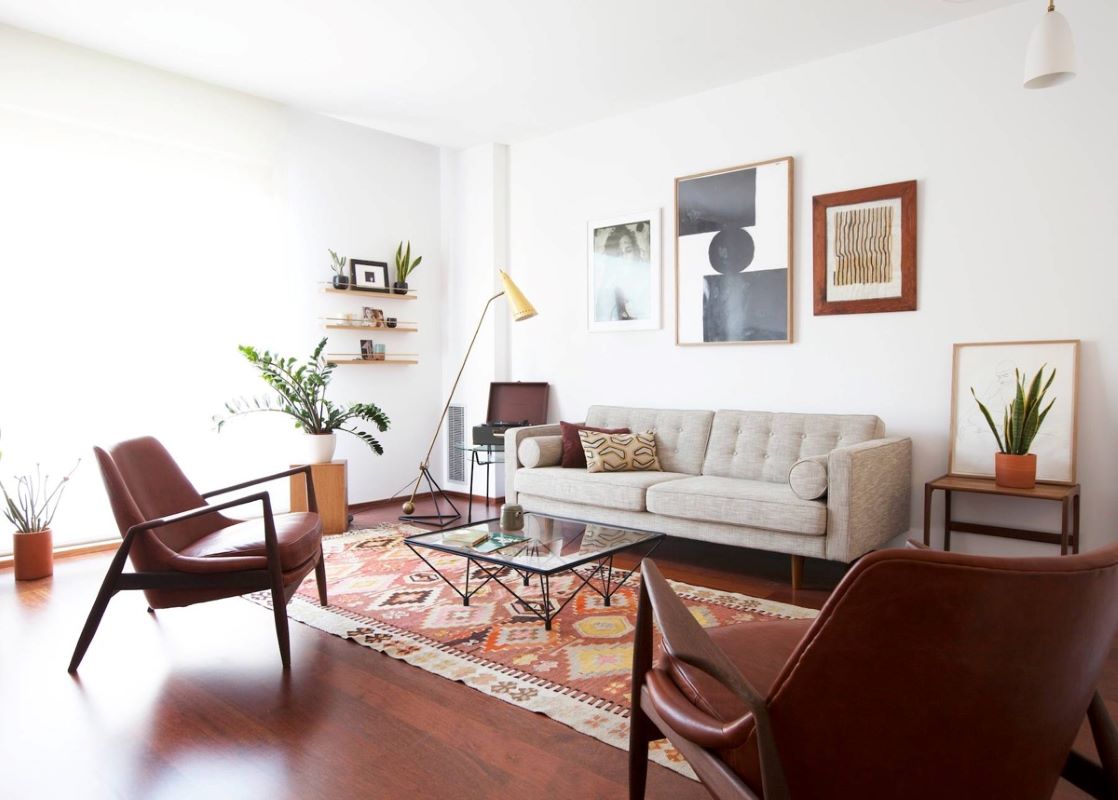 The term is presently used to describe mid-century modern architecture, design, and furniture. Its development coincided with America’s post-World War II economic expansion, which resulted in increased disposable income and a new focus on leisure and consumerism.

Mid-century modern living rooms are experiencing a resurgence in popularity. This is partly due to the style’s clean lines and simple aesthetic, making it well suited to contemporary tastes. In addition, mid-century modern furniture is now widely available thanks to the popularity of vintage dealers and online retailers. 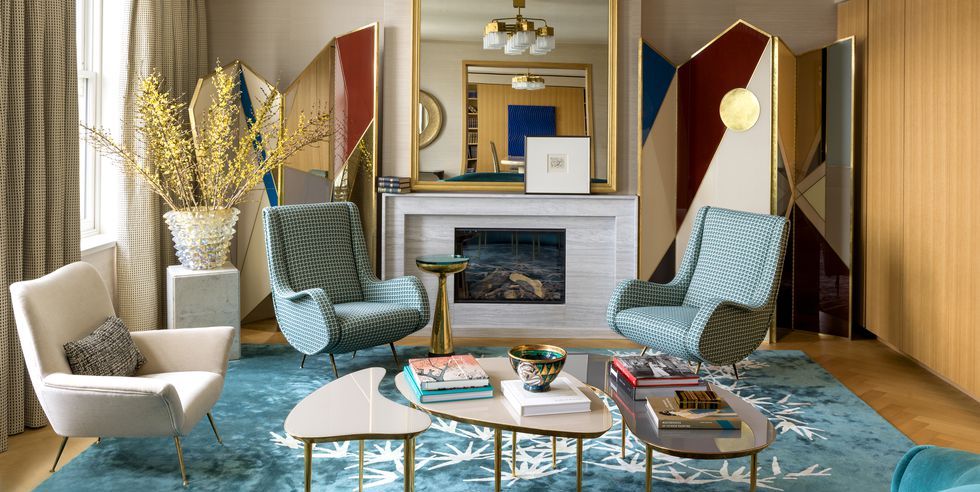 Today, mid-century modern living rooms belong to the most popular spaces in homes across the globe. And it’s not hard to see why. These rooms are comfortable, stylish, and incredibly versatile. So, if you’re thinking about giving your living room a 1950-ish makeover, here are some essentials to look for. 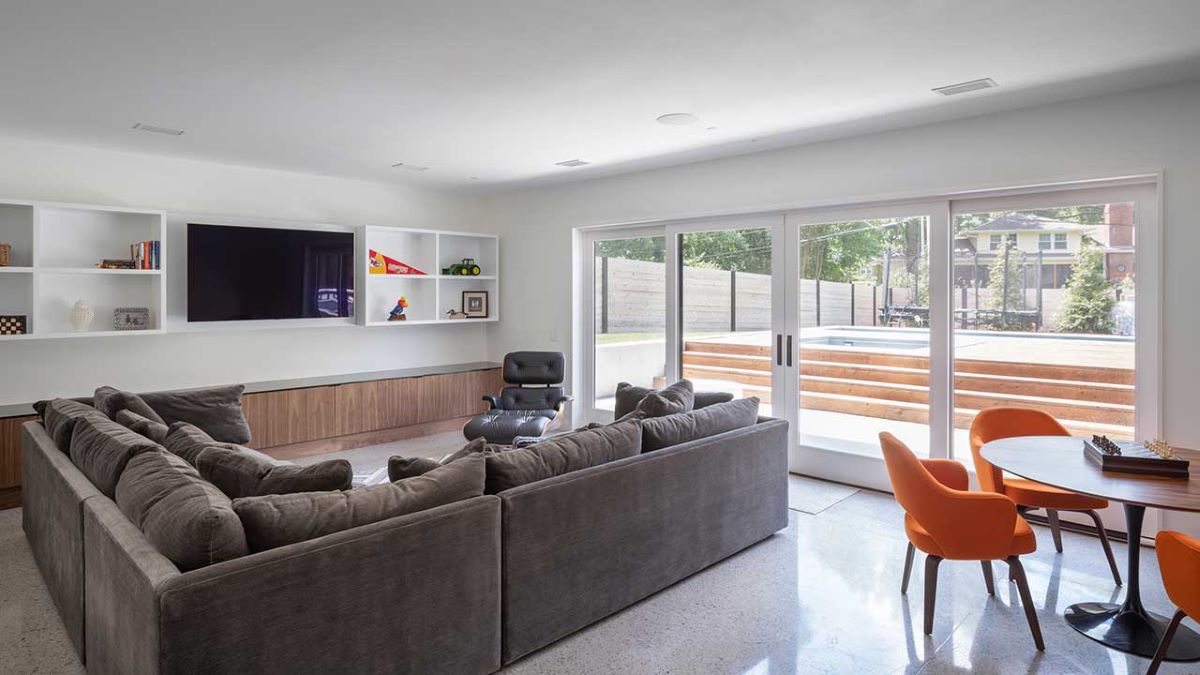 If you’re a fan of mid-century modern design, you’ll know that there are certain staples that can really make or break a room. 1950s living room ideas, for example, thrive on iconic furniture pieces that have come to be synonymous with the style’s distinct aesthetic.

These pieces all boast clean lines, simple forms, and natural materials. Each has become a design classic in its own right, and they continue to be popular choices for those seeking to create a mid-century-inspired living space. When used in combination, they can easily deliver a truly stunning result. 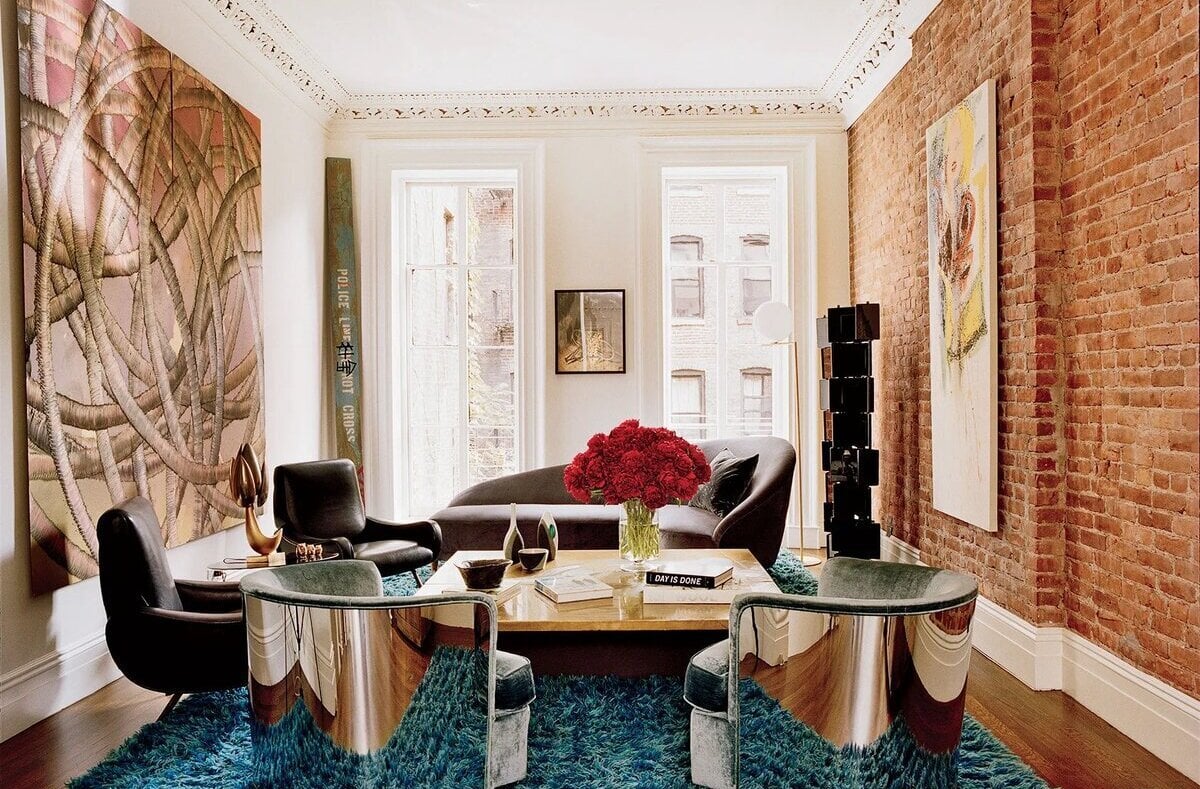 For example, you might start with an iconic Eames Lounge Chair or a Nelson Platform Bench and build the rest of the arrangement from there. If you follow the basic rules of functional simplicity, you will soon create a mid-century modern living room that feels right on point.

Of course, there are more than just those two designs worthy of attention. Consider a Noguchi coffee table or an Arne Jacobsen Egg Chair if you prefer something slightly more understated. Whatever your style, certain mid-century modern pieces are sure to make a statement if you use them right.

The essence of the mid-century modern living room begins with American designers Charles and Ray Eames. They applied design principles to mass-produced products like chairs and tables. While Eameses’ work was unquestionably influential, mid-century modern living rooms really came into their own in the 1950s and 1960s. That was a time when new technologies and materials were making it possible to create new designs with cleaner lines and simplified forms.

The mid-century modern living room reached its top in the mid-1960s when designers like Verner Panton and Joe Colombo created some of the era’s most innovative and radical furniture designs. 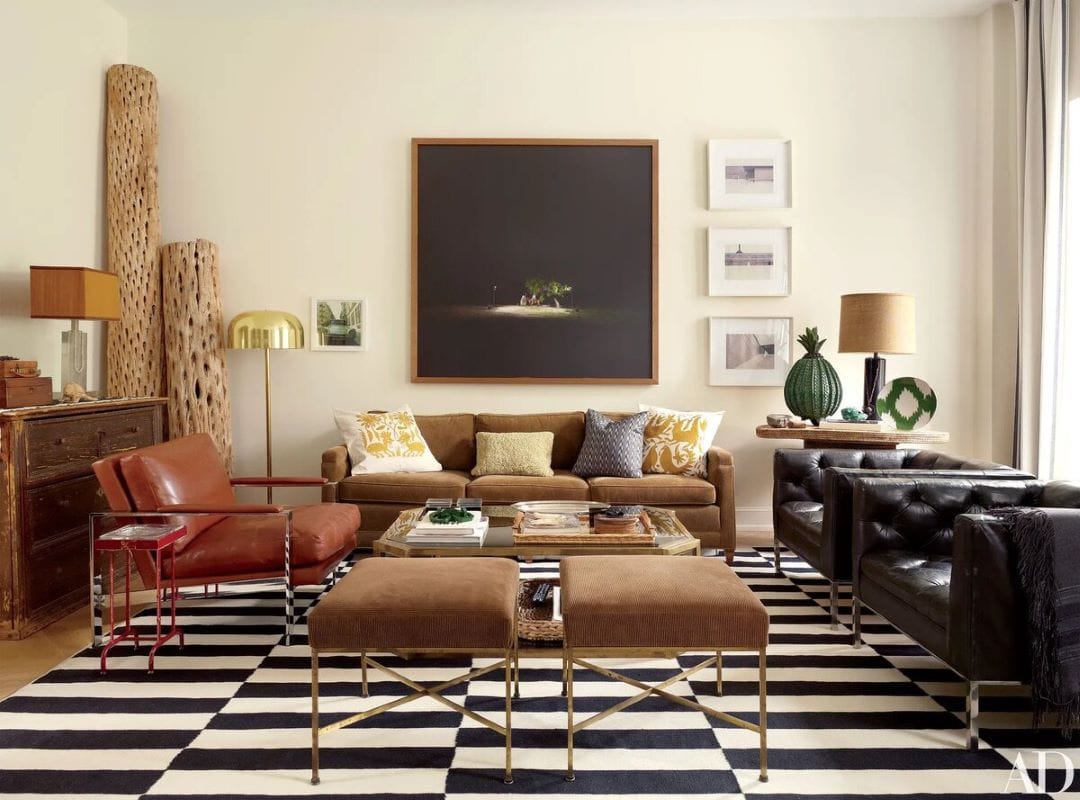 Czech-born engineer and designer Ludwig Mies van der Rohe popularized the use of clean lines, open spaces, and glass in interior design. His work was celebrated for its unadorned minimalism, which he believed would bring a sense of order to any room.

Danish designer Arne Jacobsen also championed the mid-century modern aesthetic. His furniture designs, like van der Rohe’s, emphasized function and simplicity. And like van der Rohe, Jacobsen believed that good design should be accessible to everyone.

During the decades, these designers’ work had a profound influence on the way we think about interior design. Today, the mid-century modern style is more popular than ever, and we have these visionaries to thank for it. 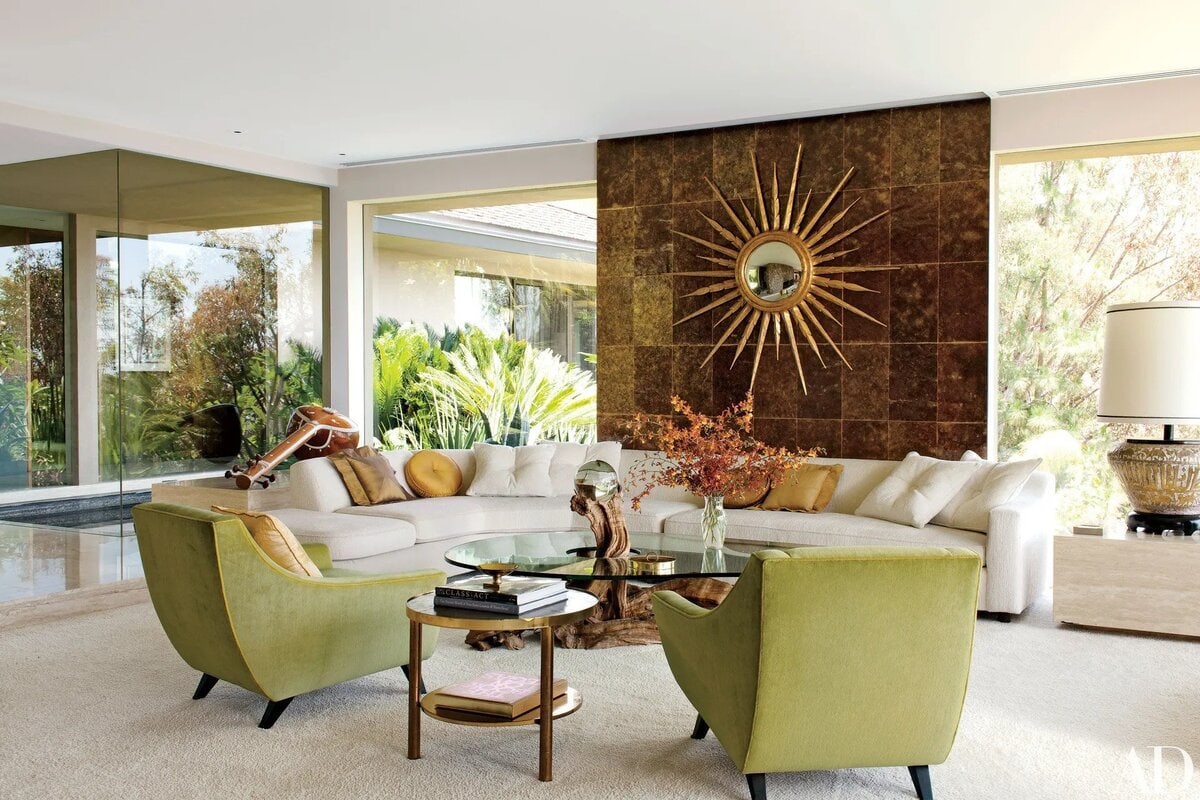 1950s living room ideas focus on simplicity and functionality. It is all about creating a comfortable, practical space that is simultaneously timeless and on-trend. The style is often described as a “less is more” approach to design and defined by clean lines, natural materials, and a lack of clutter. Architecturally, the spaces commonly include large windows and an open floor plan as notable features, making them perfect for entertaining.

The root of the design inspiration lies in nature, hence organic shapes and natural materials make the key elements. Wood, rattan, and leather and often used in contemporary living rooms to convey a sense of cozy sleekness. Mid-century modern furniture is typically lightweight and easy to move around, making it a good choice even for smaller spaces. 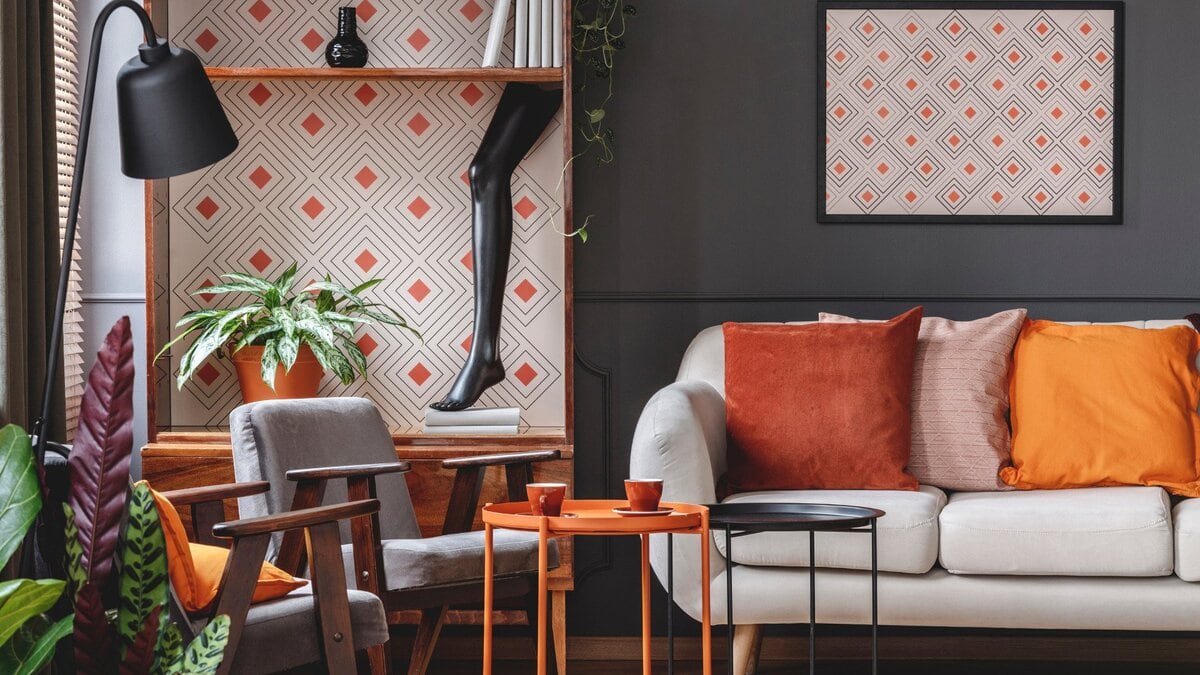 Many of the style’s iconic furniture pieces are typically low to the ground with raised legs, giving them a light and airy appearance. The focus is on comfort and relaxation. Common sofas and chairs’ upholstery is cotton or linen, while the floor materials encompass hardwood or stone. As for the lighting fixtures, these are usually sleek and minimalist, with exposed bulbs that add a touch of industrial chic.

Colors are typically muted. Beige and brown tones are the most common, followed by toned-down hues of green, orange, red, yellow, and blue. However, despite the neutral primary palette, it is not uncommon to see bold colors and geometric shapes tactically incorporated into the decor. Warm jewel tones, such as emerald green or sapphire blue, make a good choice for accents. 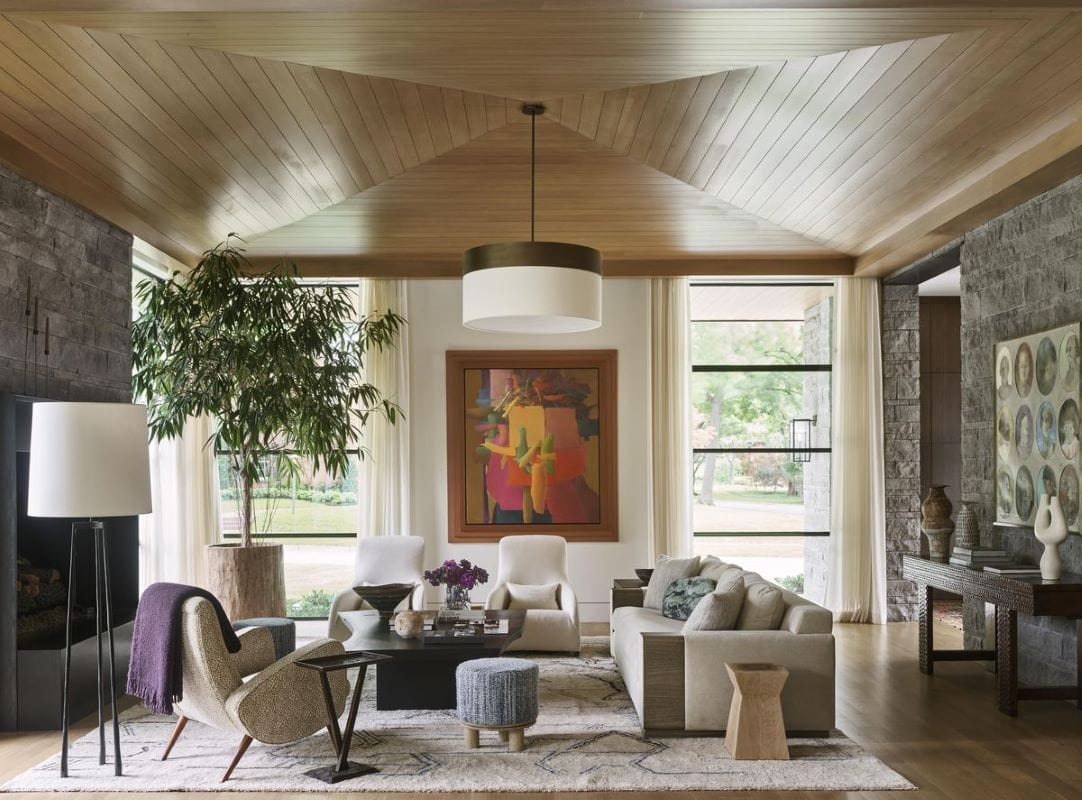 In terms of layout, mid-century living rooms typically favor an open floor plan. This means arranging your furniture to allow plenty of flow and movement throughout the space. The focus is on function over form, and the layout promotes interaction, relaxation, and conversation.

What to Avoid in a Mid-Century Modern Living Room? 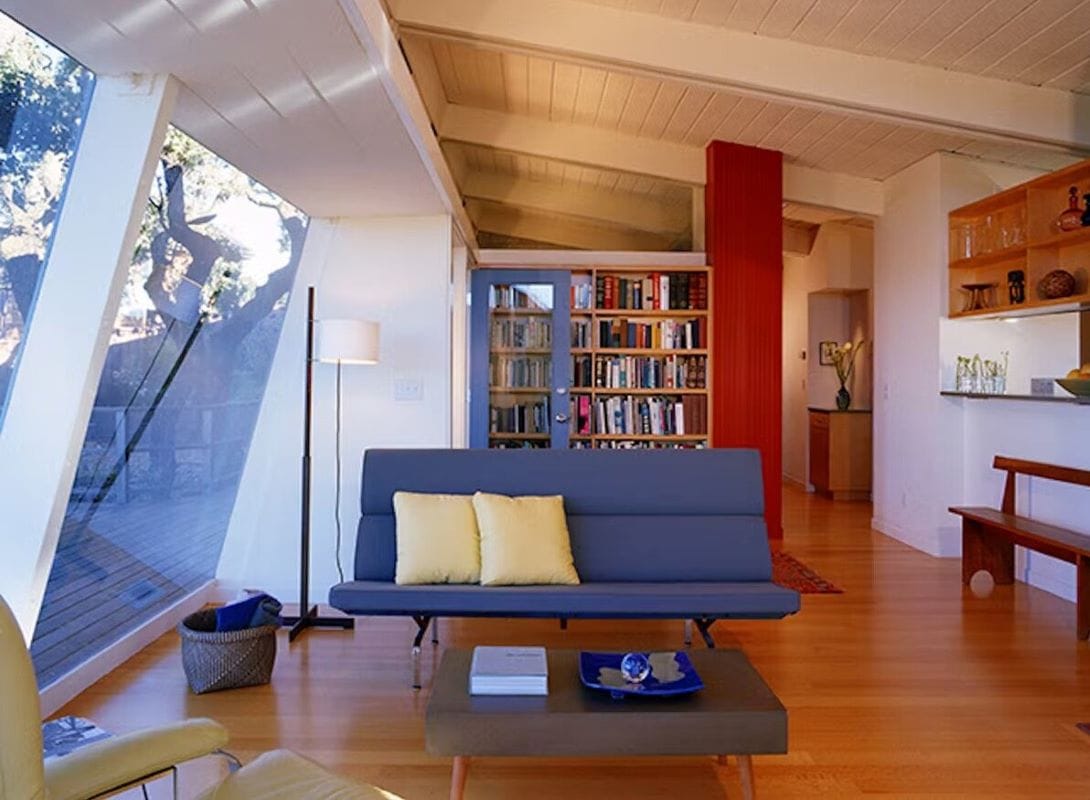 When it comes to mid-century modern living rooms, there are a few things you’ll want to avoid if you want to stay true to the style.

First, steer clear of heavily patterned wallpaper or fabric—have we mentioned already that mid-century modern living rooms are all about simplicity? Also, instead of traditional patterned fabrics such as damask and velvet, opt for style-appropriate patterns like geometric prints or atomic motifs. 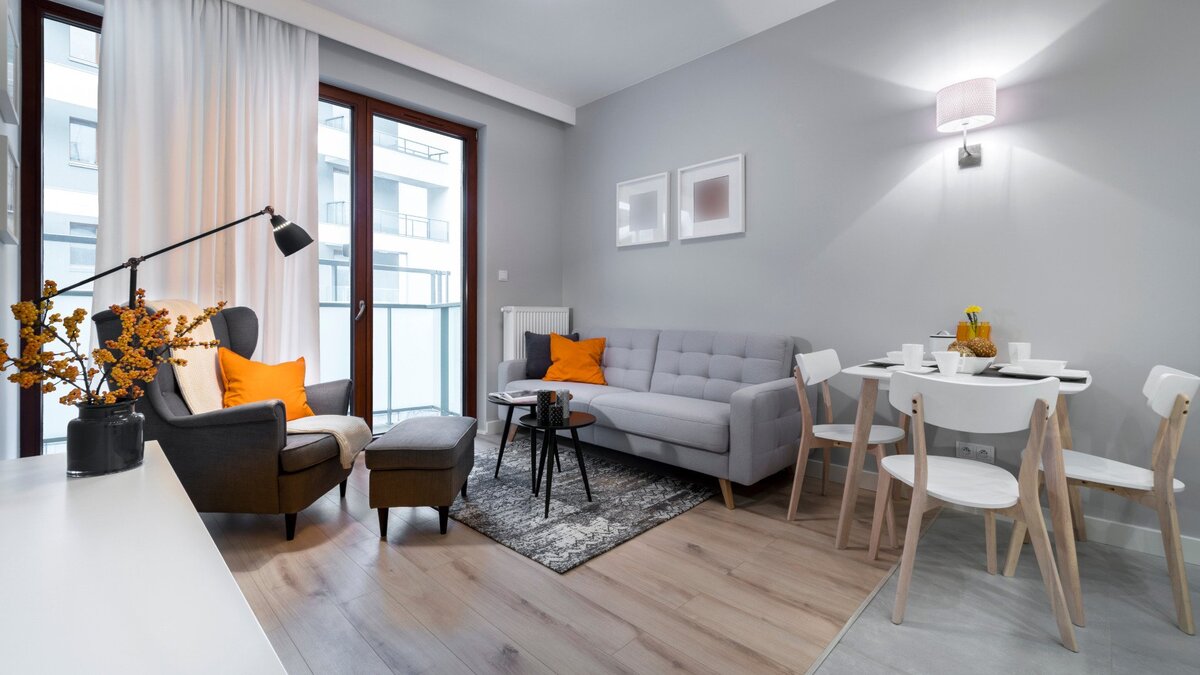 Second, be sparing with your use of color – a mid-century modern living room should be broadly neutral, with pops of color coming from art or accessories.

Avoid using heavy drapery or window treatments. Instead, opt for simple sheers or blinds that transmit a maximal amount of light. 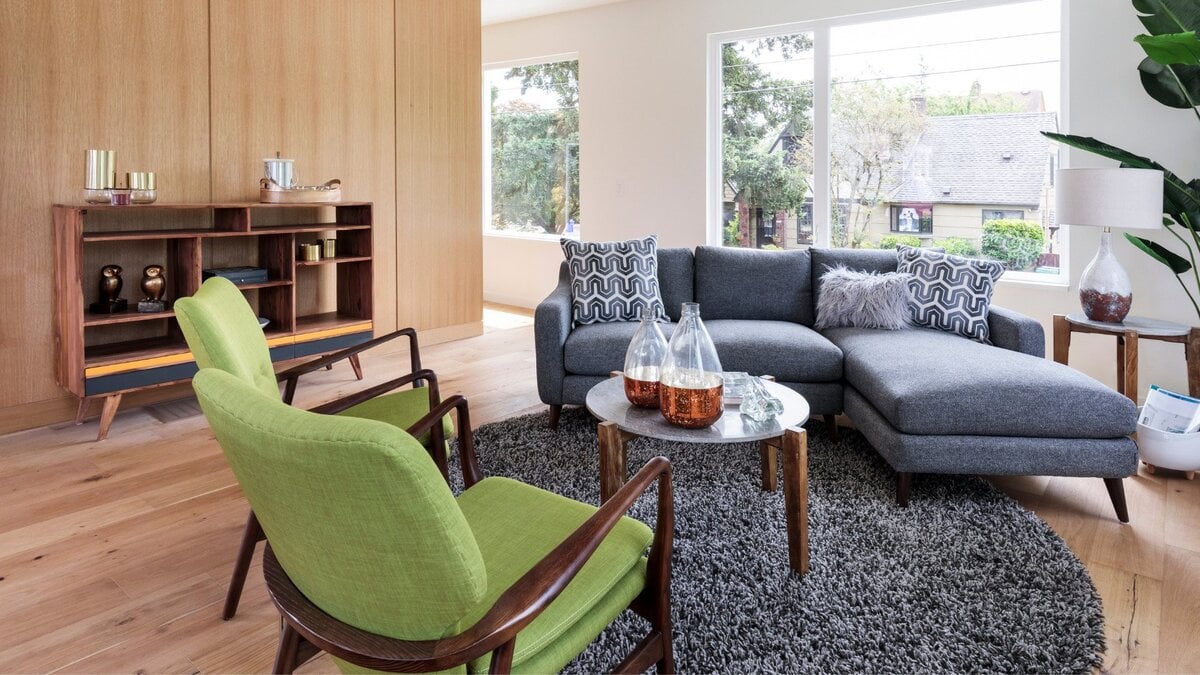 Resist the urge to clutter up the space – mid-century modern living rooms should be open and airy. So, keep that in mind when choosing furniture and decor. Go for a few large-scale pieces, such as a statement coffee table or floor lamp.

And finally, be sure to bring in some natural elements, like plants or wooden accents, to convey a warm and inviting vibe.

In love with the mid-century living room design? Make it your own!

We’ve got you covered—start your interior design project now!

Or, consult our experts online free of charge to learn more first.